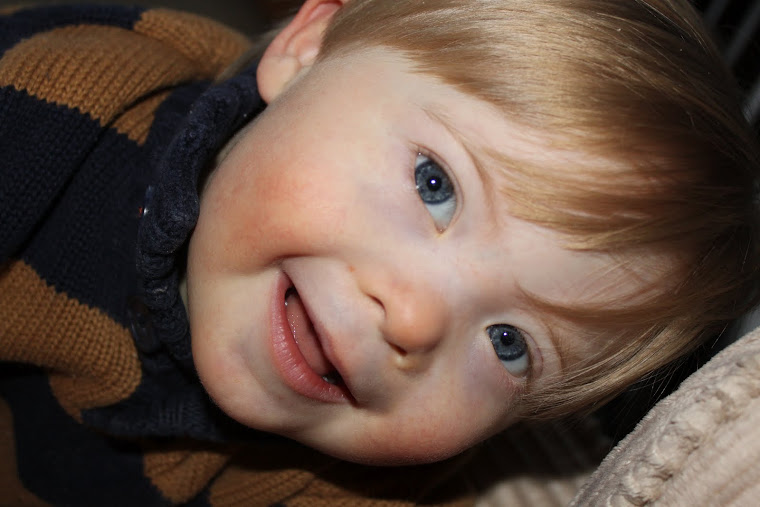 According to the online Merriam-Webster Dictionary, the adjective form of THE word is:

retarded (adj): slow or limited in intellectual or emotional development or academic progress

No where there does it say "stupid", "ridiculous", "brainless", "dense", "dumb", "idiotic", "meaningless" or "moronic".  So, why do so many people still use the r-word when describing themselves (or others or situations) as such?
My son Jack is developmentally delayed in some areas, but emotionally and socially he is well beyond his typical peers.  And, I have known plenty of "academically limited" people without any medical diagnoses in my time, and no one ever called them "retarded."
The truth about the r-word is that it is no longer even accepted as proper medical jargon to describe individuals with cognitive disabilities. And, when you use THAT word in everyday language to describe someone as "ridiculous" or "stupid," most likely you are (1) offending someone around you (like me and my son), and (2) you're in fact making yourself look like the one who is "mindless."  The English language is full of plenty other adjectives out there to pick from, people.  Ones that are relevant to your situation at hand, and ones that won't make me cringe and want to high five you ... in the face.
My son Jack is many things ...
He is a beautiful 2 and a half year old boy.
He is happy. He is healthy. He is funny.
He is giggly. He is loving. He is giving.
He is stubborn opinionated. He is smart. And, he is very cute.

Yes, Jack does have Down syndrome and may have an intellectual disability, ...
but he is also the very air I breathe. 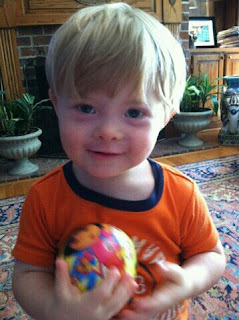 So, when I hear you or someone else say THAT word, it takes the breath right. out. of. me.

Tomorow, March 6, 2013, is this year's Day to Spread the Word to End the Word.  Please be a fan of RESPECT, and visit this site to pledge and support the elimination of the derogatory use of the r-word from everyday speech and promote the acceptance and inclusion of people with intellectual disabilities.  I beg you to share the knowledge of this movement with all your friends, families and coworkers as well, in a united effort to end the pain that this one little word can inflict.

Learn it and live it.  Like it, and share it on facebook.  Email it to friends.  Blog about it.  Have a private, educational, constructively criticizing (but polite) conversation with a repeat offender.
Be an adult, and stand up for what is right.

And for the love ... please just think before you speak. 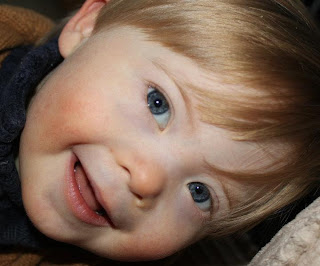 Do it for the millions of people out there affected by this word.
Do it for Jack.

To this day, I hear people say the r-word around me and, believe it or not, some still even say it to me without even thinking about the pain they are causing.  At these times, I politely pull these individuals aside to educate them about their poor word choice {misuse} and to tell them that, although I know they did not mean for it to be, it is incredibly offensive and hurtful to me and my family.  Even so, I still continue to witness repeat offenders in my very own life by some of the people closest to me, from coworkers to friends in my social circle.  I know it's "just a word" to you, but if it is "just a word," then just stop saying it.  It's that easy.  Because to me, that word is offensive, and it hurts me like a dagger to my heart.  That word is derogatory.  That word is NOT COOL.
And, quite frankly, well ... I'm tired of it.

Jack is my son, who just happens to have an extra chromosome.
He will continue to grow and learn, and he will be a contibuting member of society.
He will be respectful, and he will ALWAYS be your friend.
So, please ... be his friend back.  And, show him and others like him the RESPECT they deserve. 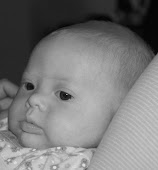 "For I know the plans I have for you," declares the LORD, "plans to prosper you and not to harm you, plans to give you hope and a future." -Jeremiah 29:11

"For God sees not as man sees, for man looks at the outward appearance, but the Lord looks at the heart."
-1 Samuel 16:7

Korey Hickling (Jack's mom)
My husband Robert and I are the proud parents of an adorable baby boy, Jack, born May 28, 2010. Our Jack was diagnosed with Down Syndrome the day of his birth, and our life hasn't been the same since! We feel blessed to have wonderful family and friends, and we can't wait to see what the future holds for our new family. Welcome to our new "normal!" 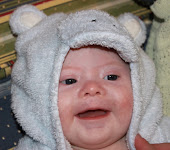 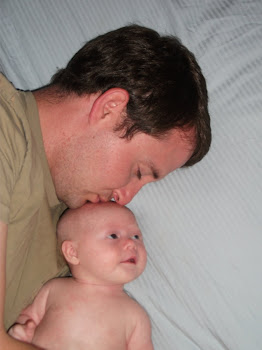 A Creed For Babies With Down Syndrome

My face may be different

But my feelings the same.

I laugh and I cry

And I take pride in my gains.

I was sent here among you

To teach you to love

As God in heavens

Looks down from above.

To Him I'm no different

His love knows no bounds

It's those here among you

In cities and towns

That judge me by standards

That man has imparted

But this family I've chosen

Will help me get started.

For I'm one of the children

So special and few

That came here to learn

The same lessons as you

That love is acceptance

It must come from the heart

We all have the same purpose

Though not the same start.

The Lord gave me life

To live and embrace

And I'll do as you do

But at my own pace.